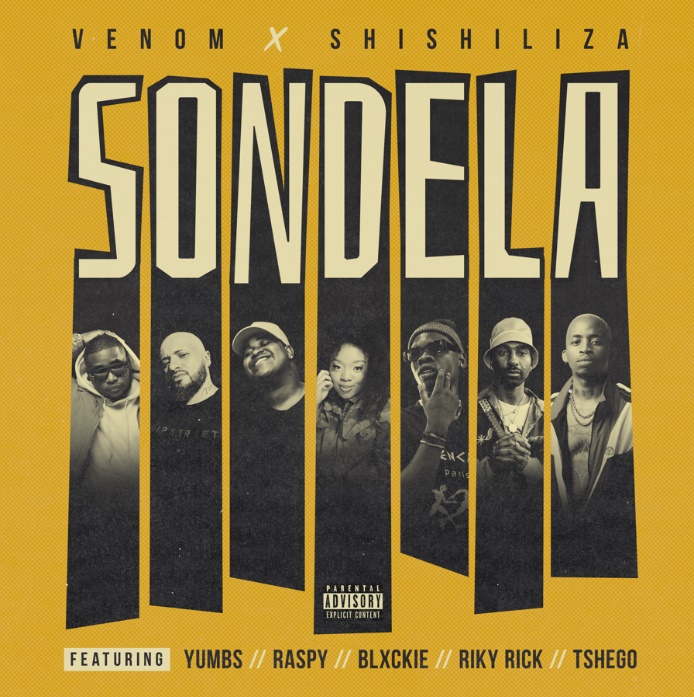 Three weeks after dropping their hit single on Valentine’s Day, Venom and Shishiliza’s ‘Sondela’ has been certified Gold! LISTEN HERE.

Speaking about the success of the single Venom says:“Sondela is very bittersweet. Bitter in the scene that we lost Ricky and sweet because it’s doing everything, we had imagined it for it to do. It’s crazy because we fought over the song so many times in the weeks prior to its drop and here we are with this no.1 but one of us is missing.” “It’s a very bittersweet feeling but we thank God nonetheless.”

Two singles in the bag and an upcoming collaborative project on the cards, Shishiliza shares that he looks forward to Sondela’s growth in South Africa, the rest of Africa and globally. He continues to speak about the single’s success by saying; “I am very happy and Blessed with the success of ‘Sondela’; it’s a song that we have been working on since June last year. There have been a lot of back and forth trying to perfect the song and the success means all the time we put into it was worth it.”

BashVision aka ShiShiliza is an all-rounder known for being an A&R, Songwriter, Artist Manager & Producer. Born in Zimbabwe, raised in Botswana & moved to Johannesburg at the age of 14. Bash entered the industry as an A&R, DJ & Photographer for Cassper Nyovest’s Family Tree Label. In 2017 Bash signed Nadia Nakai to Family tree & added another title to his name as manager where he worked on the musical development and branding of the artist. Since then, Bash has managed the likes of Reason & Boity. Most recently Bash has returned to his first love of making music & stepping to the front stage under the name ShiShiliza. Alongside DJ Venom, ShiShiliza is curating a compilation of songs that they believe will grow & benefit the SA HipHop Scene.

KEEP UP WITH VENOM

Venom is a Pretoria based Hip Hop DJ,

Venom has worked with artists such as Rouge, Chad Da Don, Focalistic, Anatii and International pop

artiste, Omarion. He has become a favourite in the Night Club Industry in South Africa gaining him a Summertime.

Residency in Cape Town every December to mid-January which started in 2017.

One of Venom’s first projects was #WezzleWednesdays which was held at Blue room Hatfield, Pretoria.

The concept behind this was to create a platform for Pretoria based upcoming artists and DJs.