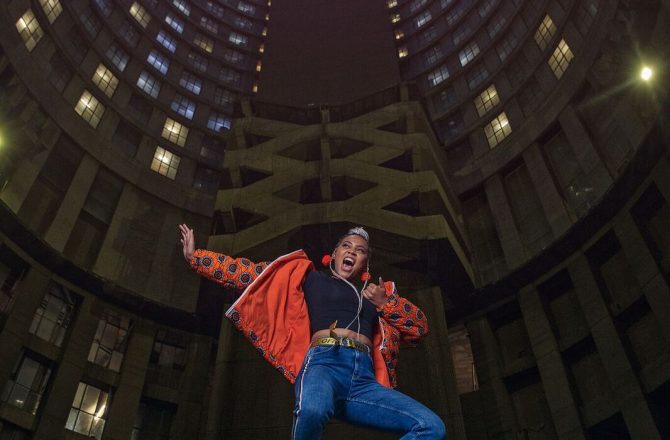 Sho Madjozi has been announced as the TRACE Mobile Brand Ambassador. The Press Conference took place at the iconic Ponte City Towers.

During a press conference on 27 June 2018 at the iconic Ponte Tower in central Johannesburg, TRACE Mobile announced its plans to launch the brand’s engaging #NeverExpire campaign with Sho Madjozi at the helm, which seeks to pay homage to people, brands and places that have remained “timeless and fresh” in the hearts and minds of many people.

“We are very excited to partner with Sho Madjozi because we feel she embodies everything about the TRACE brand and TRACE Mobile – our values and our multicultural appeal to young people. Much like her, we proudly celebrate  and embrace Afro-urban culture, said Prescillia Avenel-Delpha, Chief Marketing Officer for TRACE Mobile.

Bringing to life the #NeverExpire concept, TRACE Mobile will release a series of videos with young people who are involved in projects that have either thrust them into the public eye or continue to contribute to the ever changing, celebratory and positive African narrative.

The first to be released is brand ambassador Sho Madjozi’s, in which she speaks about how she views her Tsonga heritage as the epitome of the #NeverExpire concept. The campaign will continue with a handful of influencers, asking them about what they do to stay fresh and #NeverExpire.

Asked how she feels about collaborating with TRACE Mobile, Sho Madjozi says the partnership felt natural: “This is so dope! My phone and my music are two of my favorite things and now I get to work with a brand that combines them perfectly. Plus TRACE is unapologetically African, like me!”