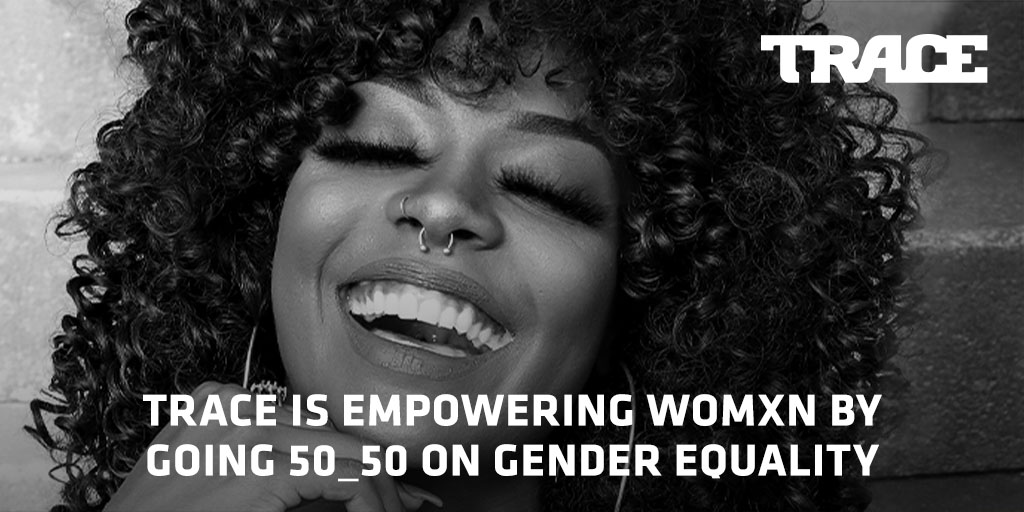 BALANCED AIRPLAY ACROSS ALL THEMATIC TRACE SHOWS THIS MONTH

Johannesburg, South Africa – In a deliberate move to balance out the playing fields with their ongoing commitment to gender equality, Trace today solidified its bold pledge to institute TRACE 50_50 video airplay for womxn artists and other womxn produced content.

Following the decision taken by the team during Womxn’s Month in August, Trace consequentially began slotting in more female produced content across their channels. And with another substantial increase in September, Trace can officially confirm the move from the previous 40/60 ratio to a committed 50/50 on all their thematic shows now. Trace will also focus more on womxn generated shows and music content, further pushing their equal play agenda.

A unique celebration of womxn talent – a first of its kind on the continent is finally at our doorstep.

Femme Hour
Trace Urban adds a more flavour to the musical treat with a brand new show – FEMME HOUR every Monday at 6 PM CAT. FEMME HOUR allows women in the music game to own their throne in a brand new way.

R&B VIBEZ
Want to soak your heart in music that speaks to the soul, well stay glued to your screen for the new Trace Urban show – R&B Vibez every Monday at 9 PM & Sunday at 11 AM, right here on Trace Urban

REWIND
Press REWIND to your favorite jams and relive the musical experience of it all. Catch Trace Rewind right here on Trace Urban every day at 9 AM

PRAISE VIBES
100% Praise 100% Vibes, tune in to TRACE GOSPEL for your favourite old and new Praise songs, every day at 8 AM and 7 PM CAT – ONLY ON CHANNEL 332 we are gospel music.

STAR UP
Get up, dress up, and get your holy groove on! Start your day on a high note, catch Star Up every day at 6 AM with your get up and go songs only on TRACE GOSPEL channel 332 – we are gospel music.

The only exclusion for Trace 50_50 will be the ‘Chart Shows’ and ‘Playlists’ which are governed by public popularity, ranked by the number of gross audience impressions, computed by cross-referencing exact times of airplay with official viewer data.

“Trace remains committed to celebrating and advancing Womxn in the music industry to ensure inclusion and equality for all. We are extremely excited about this movement, especially in light of Trace’s ongoing commitment to create gender equality, Trace 50_50 just made perfect sense in balancing out airplay for womxn in the industry” shared Trace’s Managing Director – Southern Africa & Regional Director Anglophone Africa Valentine Gaudin-Muteba,”, Yes it’s an audacious move as a music channel, but we are here for it. We are here to lead the change that is so desperately needed! At Trace we focus more on walking the talk, with the hope of paving the way until all genders have the same opportunities for airplay.”