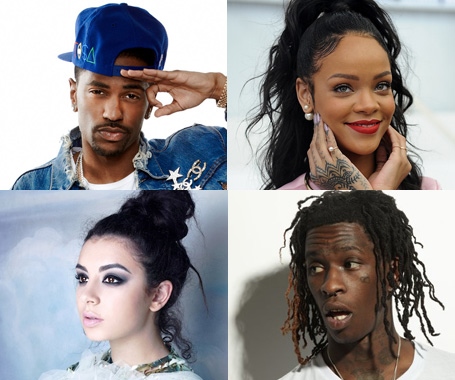 The 20 years old British man is a young singer-composer who is already successful in Britain. He recently musically seduced Madonna with whom he worked. No doubt we should hear about him in 2015.

2014 has been the year of the revelation for Young Thug. His unbridled rap seduced the USA but also crossed the Atlantic with the hit “Lifestyle”. 2015 will be the year of the confirmation for him with many projects to come.

Stanley Enow comes from Cameroon and is often compared to Lil Wayne. His hit “Hein Père” was huge back in 2013 and now the Bayangi Boy is about to release his first album “Soldier Like My Papa”.

The Barbadian girl is eagerly awaited with her 8thalbum “R8” which should be released in 2015. She would have collaborated with Kanye West, Dj Mustard, Natalia Kills, Emeli Sandé and many others. Known for releasing almost one album a year, Riri choose this time to delay his LP to release the perfect one!

Fuse ODG invaded the charts in 2012 with his smash single “Antenna”. He released his first album “Tina” in 2014 and will probably keep dropping bombs on in 2015!

The Mississippi’s duo exploded to the general surprise with both hits “No Flex Zone” and “No Type” in 2014. Their first album “SremmLife” will be physically out on January 6thand is already available in digital format on Itunes.

The Cameroonian rapper-producer made a name for himself in 2014 with his hit “Mets l’argent à terre” and his album “H.I.V” which stand for “Humanity Is Vanishing”. Jovi has mixed French and English in the same tunes, and it works perfectly. His success should definitely grow in 2015.

Since he broke up with Naya Rivera and found love in Ariana Grande’s arms Big Sean is a new man! And we can feel it with the new material he dropped in 2014 like “IDFW”. His new album could be a great surprise!

The third album of the Compton rapper which should be released this year will be different from his last one. The first extract “I” and his 2ndtrack sang live on US television lets us think that his project will be more Soul and Melodic. Yet the formula works perfectly and we are eager to hear his new offering!

Already on all radars for two years now beside Dj Mustard, YG and Wiz Khalifa, Ty Dolla $ign will release this year his first solo album, Free TC, on a major. The first single “Stand For” produced by Diplo and Dahi holds all his promises.

The English singer has just released her album “Sucker” and all the singles are topping the charts. She should fight Rihanna for the throne of the Queen of the Pop in 2015.

This Haitian singer hailing from Miami is getting more famous every year on the Zouk scene. 2015 got off to a great start with her last collaboration with Marvin.

We don’t have news from the Black Eyed Peas but Fergie is back on track. Her first single “L.A.LOVE” is a major hit. Her new album should be out in early 2015.Wil.i.Amis behind the deck for a few tracks.

Christian Taylor, better known as TeeFlii, confirmed what we heard on his first mixtapes with his hit “24 Hours”. His first album “Starr” should be released in February 2015 with a special collaboration with Chris Brown.

Kanye has been rumored to work on some new material for quite some time and we are right to believe he will release a new project in 2015. He is said to have recorded several tracks between New York, Mexico, and Paris with Young Thug, Pusha T and many others. He has just released a new song with Paul McCartney called “Only One”.