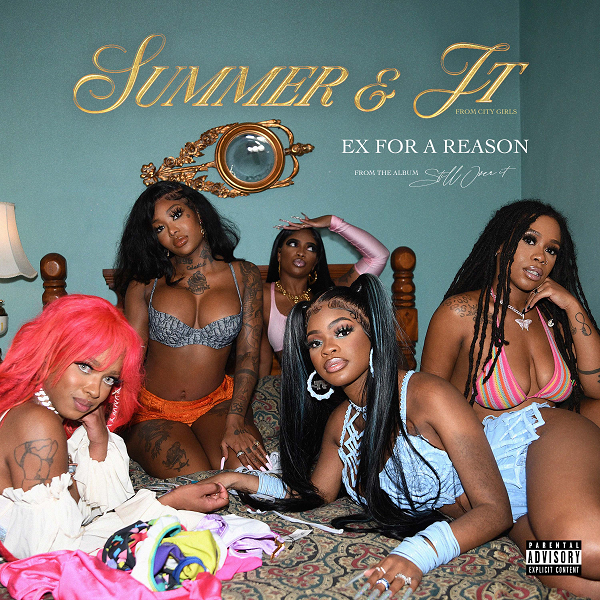 Summer Walker (LVRN/Interscope Records), releases “Ex for a Reason” ft. JT of the City Girls; the first single from her forthcoming sophomore album, Still Over It. The Buddah Bless and Sean Garrett-produced track is the perfect blend of ear-catching mass-appeal and lyrical grit as Summer and JT fire warning shots to their unfaithful partners before recalling that they are, in fact, an ex for a reason. JT stormed onto the scene in 2018 as half of the Miami duo, City Girls; the first ladies of the esteemed label, Quality Control Music. Today, iHeart Media will be premiering the single across their network of hip hop stations where they will play the song every hour, on the hour.

The release comes just a week after JT appeared in the album’s commercial trailer; a skit that insinuated the duo’s collaboration while also recreating the scene from Summer’s 2019 debut album artwork. Watch HERE. The R&B goddess dropped the news via Instagram while simultaneously teasing three songs from the 20-song tracklist: “Bitter,” “Ex for a Reason” and “Ciara’s Prayer.” The latter features narration courtesy of fellow Atlanta superstar, Ciara; who has openly discussed her journey to marriage. Early reactions have proven that fans are already clamouring at the chance to finally hear the words spoken in her now-famous prayer. In true Summer fashion, the tracklist includes an interesting twist. Listed alongside each title is a date signifying the timeline of the story the album will inevitably tell. Still Over It will be released on November 5th and is now available  HERE.

Summer’s debut album, Over It, was a massive success, spending 102 weeks on the Billboard 200 and 14 weeks at No. 1 on Billboard‘s Top R&B Albums chart. Over It produced eight hits on the 2020 Billboard Hot R&B/Hip-Hop Songs chart and, to date, the tracks have collectively generated 3.6 billion US streams. In July 2020, Walker’s EP, Life on Earth, debuted inside the top 10 on the Billboard 200 at No. 8. Summer has covered both Rolling Stone and Billboard magazine and has taken home several major awards from the likes of Soul Train, iHeart Music and the Billboard Music Awards. Summer signed singer-songwriter NO1-NOAH to her imprint, Ghetto Earth Records, which is a joint venture with Interscope Records

For more information and exclusive merch, fans can visit www.summerwalkermusic.com