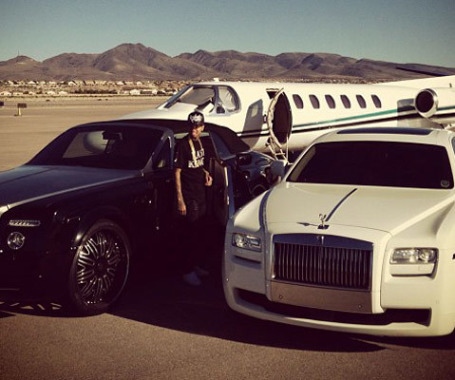 It’s not a secret, rappers adore luxury cars and they don’t hide it! If in France we are a bit reluctant to take out hundred thousand euros racing cars on the road, Americans are proud of it and it’s very easy to know who drives what just by seeing it on their Instagram accounts! TRACE has made for you a list of the stars with their favorite cars.

Kanye’s favorite toy is by far his Lamborghini Aventador! Estimated around $700,000, it is not necessary to say that he can afford it with not less than 21 million albums sold. We don’t know however how Kim manages to get inside the car…

One of Lil Wayne’s last acquisitions is a brand new Bugatti Veyron for 2,2 million dollars! The rapper is at the head of a real financial empire with Birdman but we do not know if he paid it in cash…money.

T.I seems to like to drive the English-way. He has chosen among the luxury brand Bentley the Mulsanne model, a big limousine that you can acquire for around $400.000!

Pharrell has a big garage. He is already the happy owner of a Ferrari Enzo, a Mercedes McLaren and many others. He admitted that he prefers to be driven by a chauffeur in his enormous Rolls-Royce Phantom worth $600 000. The reason for that?“Every stitch and every tiny detail are brilliant. It’s traditional and consistent quality. They spare nothing. Also, you can drive it just how you’re feeling. It can be a luxury vehicle or you can really put the pedal to the floor and go really fast. I had aBentleybut it wasn’t for me. At the end of the day, a Rolls is a Rolls.”

Rick Ross too has a rather impressive collection of luxury cars. We can already count a Rolls-Royce Phantom Drophead Coupe, a Ferrari 458 Italia, a Mercedes-Benz S Class and a Mercedes-Benz CLS Class. But the one that he likes riding the most is certainly his Lamborghini Murciélago Roadster painted in matte black and worth over $250,000!

Drake’s tastes and styles are everywhere, but he has a particular thing for cars. The rapper’s achilles’ heel is the English automaker Bentley, whose several models he possesses. But the one the one he seems to ride the most is his Bentley Continental SuperSports Convertible, estimated around $300,000.

The young rapper has a thing for Porsche! If he has several other vehicles in his garage like a Bentley Mulsanne as well as an Audi R8, the young man offered himself the last model of 911 S convertible around $200,000.

2 Chainz also signed for Porsche because he’s the owner of a Porsche Panamera worth more than $200,000, the limousine model of the brand. He explains besides that he holds a very special relationship with his car because he talks to them! He gives some explanation: “I own this car and it’s probably my favorite car right now. I call that car nasty like it has it’s own personality I talk to that car ‘You know what you’re a fucking freak.’ I told my car one day, ‘You’re gonna need an AIDS test. You can’t be out here fucking everything that you see”.

Love him or hate him, DJ Khaled is at the top of the rap scene with hits which topped the charts all around the world. When you are a big DJ, chances are that you are looking for a big car! And it’s unsurprisingly that he set his heart on a Maybach 62S for more than $500,000. Maybach was a brand possessed by Mercedes-Benz to compete with Roll-Royce, but today it has disappeared from the market. These cars are real rolling luxury hotels, and it seems that the rapper turned it into his personal office!

Hand-made and exclusively build in England, Rolls-Royces car have something special. Some people say that they even have a soul. P. Diddy made this car his everyday car because he drives a Phantom Drophead Coupe, one of the most exclusive models of the brand, estimated around $450,000. His version is white-snow with a hand-made hood finish mirror. Classy!