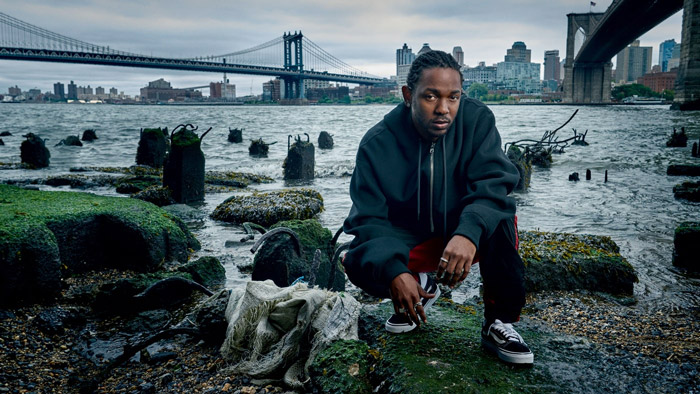 King Kendrick graces the cover of Rolling Stone once more.

Wearing a black fur coat and a piercing stare, Kendrick Lamar appears on the August 2017 issue, his second cover since 2015. Shot by famed photographer Mark Seliger, the image has him framed by two shadows on the sides of his face.

The “HUMBLE.” MC, who the magazine hails as the “greatest rapper alive,” opens up in a rare interview. The wide-ranging conversation covers a variety of topics, including President Donald Trump and Drake.

ON DONALD TRUMP HE SAYS :

“It’s like beating a dead horse. We already know what it is. Are we gonna keep talking about it or are we gonna take action? You just get to a point where you’re tired of talking about it. It weighs you down and it drains your energy when you’re speaking about something or someone that’s completely ridiculous. So, on and off the album, I took it upon myself to take action in my own community. On the record, I made an action to not speak about what’s going on in the world or the places they put us in. Speak on self; reflection of self first. That’s where the initial change will start from.”

HOW WOULD HE DEFINE WACK ARTISTS:

“How would I define a wack artist? A wack artist uses other people’s music for their approval. We’re talking about someone that is scared to make their own voice, chases somebody else’s success and their thing, but runs away from their own thing. That’s what keeps the game watered-down. Everybody’s not going to be able to be a Kendrick Lamar. I’m not telling you to rap like me. Be you. Simple as that. I watch a lot of good artists go down like that because you’re so focused on what numbers this guy has done, and it dampers your own creativity. Which ultimately dampers the listener, because at the end of the day, it’s not for us. It’s for the person driving to their 9-to-5 that don’t feel like they wanna go to work that morning.”

ON BEING A GHOSTWRITER:

ON LEARNING FROM QUEEN BEY:

“She’s a perfectionist. Think about the BET performance. She was very particular – the lighting, the camera blocking, the transition from the music to the dancing. It was confirmation of something I already knew.”

ON HIS COLLAB WITH FUTURE:

“He’s his own genius. I’ve watched him in the studio. The way he comes up with the melodies is [snaps fingers] like that, you know. You have to speak a certain type of language and also have a great study in music – the same way I have – for what he’s done. I’m sure he’s grown up off a ton of R&B. Watching him come up with the melodies, that’s a whole other ballgame, to understand them sonics.”

HIS THOUGHTS ABOUT JAY-Z:

“That was my guy. Still is. I’m still a fan. That was just a page I took out of his book, to be able to carry a lyric through conversation and make it feel like I’m sitting right here talking to you.”

“For my generation, it would  definitely have to be André 3000. He was the first guy. We’d come home from school and he’d be rapping on TV one day, then you came home a week later and he has a song called ‘Prototype,’ which just blows our mind away, you dig what I’m sayin’?”