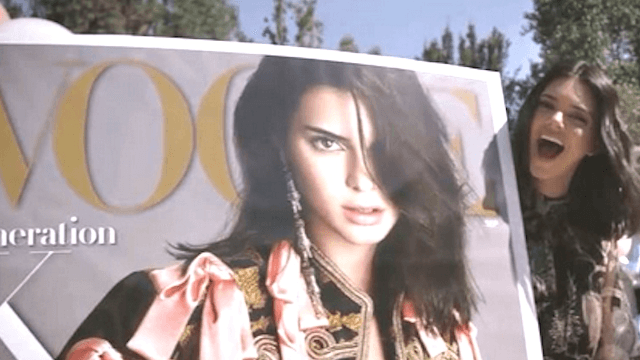 To grace the September issue is a big deal. Here is what happened when the Kardashian-Jenner clan received @kendalljenner’s latest cover. Click the link in our bio for more. Executive Producer: @RyanSeacrest Director/Producer: @carloalbertoorecchia for Ryan Seacrest Productions Music: “This Girl,” @KungsMusic Vs. Cookin’ On 3 Burners

And if you follow Kenny on Snapchat, you’ve probably noticed that she was flipping out yesterday, for good reason ! Watch below :

For those of you of who don’t know, now you know, the September spread is a really big deal. It sorta marks a bit of a change-up for the magazine. The Vogue September Issue is more important than their August, October, November, January, March, May, or every other issue, because it serves as “the fashion bible” for the season. Kendall is now a biblical figure.

The profile accompanying the cover presents Kendall as a determined, established young woman who wanted to be famous for having a career rather than make a career out of being famous.

“Kendall wanted, in other words, to avoid the fate of her sisters—to be careful about fame for fame’s sake, to be known for something solid and tangible,” writes Jonathan van Meter.