John Legend & Common: an amazing performance of “Glory” at the Oscars 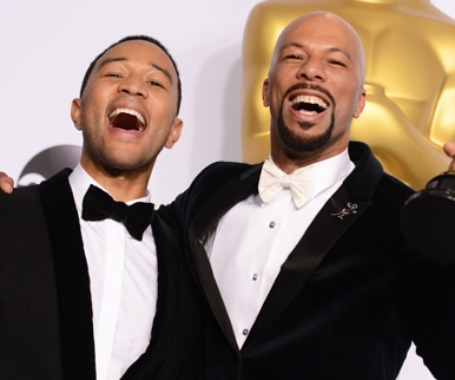 It was by far the most emotive performance of the evening! John Legend and Common have interpreted their track “Glory” during the Oscars night, and both singers gave their best to the point that they made some people cry in the attendance. This song is the main theme of “Selma”, and it has won the Oscar for the Best Original Song, too bad for Adam Levine and Rita Ora.Watch the video:

After all, it’s “Glory” which won the statuette for the 87th Oscars! The title succeeds to “Let it Go”, the main theme of “The Snow Queen”. Worn with a moving piano line and a strong text evoking the fight against racism, “Glory” was THE favorite song after it won a Golden Globe last month. Touched by the award, John Legend and Common said “Recently, John and I sang” Glory “on the bridge where Martin Luther King walked over 50 years ago. The spirit of the bridge transcends race, religion, sexual orientation, social status and links a boy in southern Chicago to France or Kong Kong” solemnly declared rapper, leaving Oprah Winfrey, in the audience, in tears.They were not the only one who pursued the gold statuette. Adam Levine, the leader of Maroon 5, vying with “Lost Stars”, the country singer Glen Campbell for “I’m Not Gonna Miss You”, Tegan and Sara and The Lonely Island for the crazy “Everything Is Awesome!!! ” from the “Lego” movie, Rita Ora for her ballad “Grateful” and John Legend and Common, the interpreters of “Glory” were all nominated.While John Legend and Common celebrated their victory, the other big winners did too! Thus, the two winning films were “Birdman” by Alejandro Inarritu Gonzàles and “The Grand Budapest Hotel” by Wes Anderson, awarded with 4 trophies each. Eddie Redmayne has emerged as the Best Actor for his performance in “A wonderful history of time” while Marion Cotillard bowed to Julianne Moore, sacred Best Actress for “Still Alice”.What do you think of their performance ?