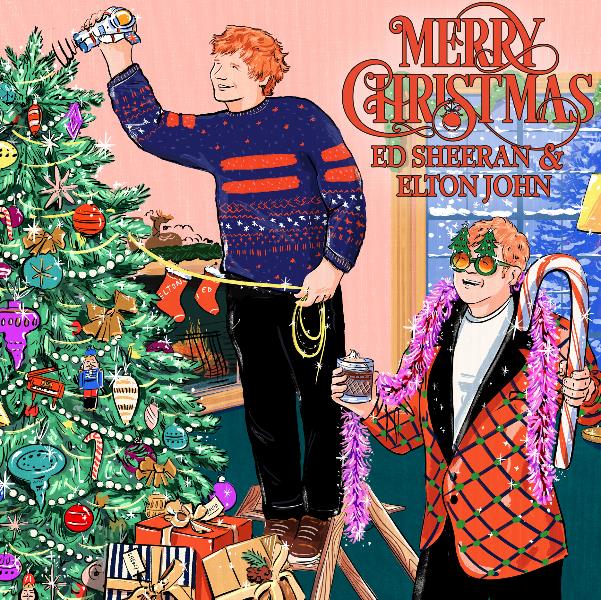 DURING THE 2021 CHRISTMAS PERIOD, ED SHEERAN’S AND ELTON JOHN’S GLOBAL RECORD AND PUBLISHING ROYALTIES FROM THE SINGLE & PROFITS FROM SALES OF THE SINGLE WILL BE DONATED EQUALLY BETWEEN THE ED SHEERAN SUFFOLK MUSIC FOUNDATION & THE ELTON JOHN AIDS FOUNDATION

‘Merry Christmas’ provides us with the perfect dose of Christmas cheer – packed with sleigh bells, uplifting arrangements and joyous harmonies, the song is topped by Ed and Elton’s heart-warming lyrics that only add to its festive sparkle: “So kiss me under the mistletoe / Pour out the wine let’s toast and pray for December snow / I know there’s been pain this year but it’s time to let it go / Next year you never know, but for now, Merry Christmas.”

Written by Ed Sheeran/Elton John and produced by Steve Mac, the blockbuster collaboration cements a 10+ year friendship and it sees the global superstars join forces for the first-ever time on an official single release. However, this isn’t the pairs’ first foray into festive music releases – in 2017, Sheeran secured the coveted UK Christmas No.1 with his timeless ballad ‘Perfect’, whilst Elton’s 1973 classic, ‘Step Into Christmas’, has gone onto become one of the most rotated Christmas songs of all time.

The official video for ‘Merry Christmas’ – scripted by Jason Koenig, Jenny Koenig and Ed Sheeran – adds further tinsel as it pays homage to scenes from legacy Number 1 Christmas music videos and iconic Christmas films. With a little help from Mr Blobby, Jonathan Ross, Big Narstie, Michael McIntyre and The Darkness, who all cameo throughout (!), we see the cast reinvent scenes from Wham’s ‘Last Christmas’; Shakin’ Stevens’ ‘Merry Christmas’; The Snowman’s ‘Walking in the Air’; East 17’s ‘Stay Another Day’ and more.

During the 2021 Christmas period, Ed Sheeran’s and Elton John’s global record and publishing royalties from the single and profits from sales of the single will be donated equally between the Ed Sheeran Suffolk Music Foundation & The Elton John AIDS Foundation.

Ed Sheeran is an era-defining artist who has sold over 45 million albums and 150 million singles across the world. Through his fusion of thought-provoking songwriting, universal pop and multi-genre influence, his rich tapestry is not only perfectly suited to his audience but it’s something that transcends generations.

Since surfacing on the UK circuit in 2010 with his ‘No.5 Collaborations Project’ – an eight-track EP featuring his favourite grime artists of the time – the Suffolk-raised recording artist has resonated with fans across the world through his peerless songcraft and versatility. And now, with five consecutive UK No.1 albums to his name – ‘+’ (2011), ‘x’ (2014), ‘÷’ (2017) and ‘No.6 Collaborations Project’ (2019) and ‘=’ (2021) – Sheeran continues to reaffirm his status as one of the most in-demand pop stars on the planet.

Prior to the release of his brand-new album ‘=’, which was released in October this year, Sheeran secured two UK No.1 singles in the UK with ‘Bad Habits’ [the UK’s biggest-selling No.1 of the year so far] and ‘Shivers’ – two tracks that sat atop the UK’s Official Singles Chart for a combined total of 15 weeks. Moreover, in the short window since its release, ‘=’ has sold over 1.5 million copies across the globe and has already seen Ed take home 2 x EMA’s for ‘Best Artist’ and ‘Best Song’; an American Music Awards for ‘Favourite Male Pop Artist’; British GQ’s ‘Solo Artist of the Year’; 4 x Los40 Awards and secure a nomination for ‘Song of the Year’ at the 2022 GRAMMY’s.

But it’s not just his recorded music that’s seen the former Glastonbury headliner become one of the sought-after artists of the 21st century either. Possessing a mystical ability to turn 90,000 capacity venues into the pub back-rooms that he first started playing in, Ed made history in 2015 after becoming the first-ever artist to play Wembley Stadium solo – without a band and with just his guitar and loop pedal – over three, consecutive sold-out nights. Move forward to the summer of 2019 and Ed would re-enter history books after the completion of his mammoth two-year Divide tour, officially becoming the most-attended tour of all time after it culminated with special homecoming shows in Ipswich, Suffolk. Next year, Ed will set off on the road again for his ‘+ – = ÷ x Tour’ (pronounced ‘The Mathematics Tour’), that’ll see him return to Wembley Stadium for a five-night run.

Ed Sheeran – who was awarded an MBE for his services to music and charity in 2017 – is the proud recipient of 1 x IFPI Award (best-selling global artist of 2017); 4 x Grammys; 4 x Ivor Novello’s; 6 x BRIT Awards (including two consecutive wins for ‘Global Success’ in 2018 and 2019); 7 x Billboard Awards + more. Moreover, to this day, his blockbusting third studio album ‘÷’ remains the fastest-selling album, ever, by a male artist in the UK, while the LP’s lead single, ‘Shape of You’, maintains its status as the most-streamed song in Spotify’s history.

At the end of 2019, Sheeran was presented with the Official Chart Company’s first-ever ‘No.1 Artist of the Decade’ award following a host of accomplishments in his native UK including the most No.1’s across the UK’s Official Singles and Albums chart from the years 2010-2019. Most recently, Ed scored another feat with the OCC after becoming the first British Solo Artist to claim 52 weeks – an entire year – at No.1 on the Official UK Singles Chart, with only Elvis Presley and The Beatles achieving more overall weeks at the top.

Elton’s career achievements to date are unsurpassed in their breadth and longevity. Elton is one of the top-selling solo artists of all time. In the UK and US charts alone he has 1 diamond, 32 platinum or multi-platinum, and 21 gold albums as well as over 70 Top 40 hits. He has sold more than 300 million records worldwide.

He holds the record for the biggest-selling single of all time, “Candle in the Wind 1997”, which sold over 33 million copies. Released in 2017 ‘Diamonds’ the Ultimate Greatest Hits album became Elton’s 40th UK Top 40 album and has spent over 200 consecutive weeks in the top 75 of the UK album charts, over 110 of these in the top 20. This release celebrated 50 years of his songwriting partnership with Bernie Taupin. August 2018 saw Elton named as the most successful male solo artist in Billboard Hot 100 chart history, having logged 67 entries, including nine No. 1s and 27 Top 10s. ‘The Lockdown Sessions’, an album of collaborations recorded during the COVID-19 Pandemic, was released in October 2021 and went straight to number 1 in the UK Album Charts, becoming Elton’s 8th UK number 1 album in the process. Its lead single “Cold Heart (PNAU Remix) with Dua Lipa” became a bona fide global hit, reaching number 1 in the UK and Australian singles charts. Its success meant that Elton became the first-ever solo artist to score a UK Top 10 hit single in 6 consecutive decades. In America, he holds the record for the longest span between Billboard top 40 hits at 50 years.

Elton announced the ‘Farewell Yellow Brick Road’ tour at New York’s Gotham Hall in January 2018. Encompassing 5 continents, and over 350 dates, this 5-year-long tour started in September 2018 and marks his retirement from touring after more than 50 years on the road. In 2019 it was named Billboard’s Top Rock Tour and Pollstar’s Major Tour Of The Year. To date, Elton has delivered more than 4,000 performances in more than 80 countries since launching his first tour in 1970. 2019 also saw the release of ‘Rocketman’ and global bestselling autobiography, ‘ME’. An epic fantasy musical motion picture of Elton’s life, ‘Rocketman’ has been a commercial and critical hit, taking close to $200m at the box office. It has won an Oscar, two Golden Globe Awards and a Critics’ Choice Award and garnered BAFTA nominations. Its soundtrack was also nominated for a GRAMMY Award.

Among the many awards and honours bestowed upon him are six GRAMMYs, including a GRAMMY Legend Award, a Tony and two Oscars, a Best British Male Artist BRIT Award, induction into the Rock and Roll Hall of Fame and the Songwriters Hall of Fame, the Kennedy Center Honor, Legend of Live Award, 13 Ivor Novello Awards between 1973 and 2001 and a knighthood from HM Queen Elizabeth II for “services to music and charitable services”.

In 1992, Elton established the Elton John AIDS Foundation, which today is one of the leading non-profit HIV/AIDS organizations and has raised over $515 million to date in the global fight against HIV/AIDS. In June 2019 President Emmanuel Macron presented Elton the Légion d’honneur, France’s highest award, for his lifetime contribution to the arts and the fight against HIV/AIDS. Elton was awarded the Companion of Honour in the 2021 New Year Honours list. The highest acknowledgement in the list, Elton became one of only 64 people to hold the honour. September 2019 saw The Royal Mail issue a set of 12 stamps as a tribute to Elton being one of the most popular and enduring music artists of all time. Elton was only the second individual music artist to be featured in a dedicated stamp issue. In July 2020 the Royal Mint released an Elton John commemorative coin, the second in their music legends series to celebrate ‘one of the most successful and enduring artists of all time’. Always a tireless champion of new artists, Elton has been a leading industry voice in lobbying the government for young artists visa-free touring rights in Europe post-Brexit.

The Ed Sheeran Suffolk Music Foundation is a charitable music foundation that aims to help young people under the age of 18, and living in Suffolk (UK), with small but useful grants to help with studying or playing music. These grants could be used for almost anything, such as buying an instrument, funding your music studies, or paying for rehearsal space.

About The Elton John AIDS Foundation

The Elton John AIDS Foundation was established in 1992 and is one of the leading independent AIDS organisations in the world. The Foundation’s mission is simple: an end to the AIDS epidemic. The Elton John AIDS Foundation is committed to overcoming the stigma, discrimination and neglect that keeps us from ending AIDS. With the mobilisation of our network of generous supporters and partners, we fund local experts across four continents to challenge discrimination, prevent infections and provide treatment as well as influence governments to end AIDS.

We will not stop until the AIDS epidemic is over.