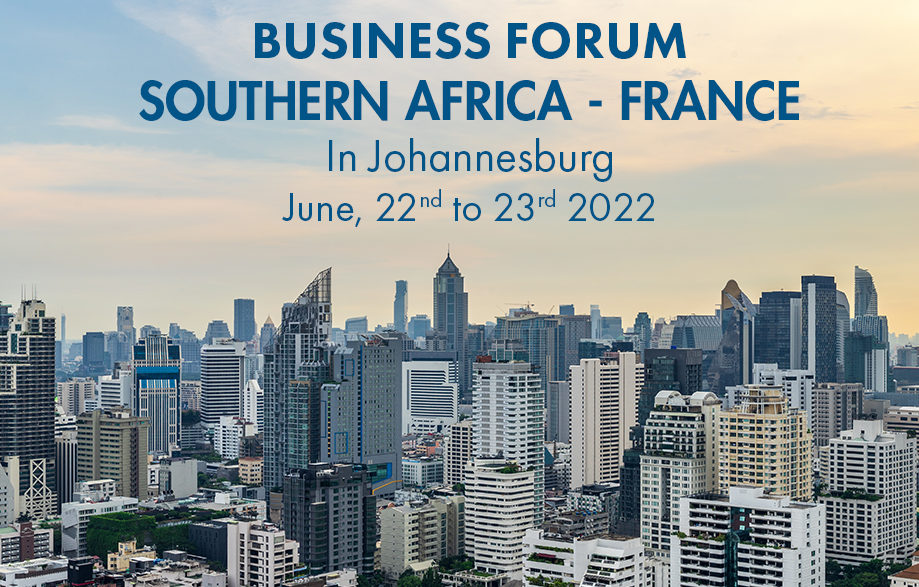 This dynamic event is organized for industry players wishing to identify new business opportunities in the Southern African and French markets or to strengthen already existing ties. It will include B2B meetings with the aim to identify future clients and partners, as well as thematic workshops including testimonies from Southern African and French companies who have successfully established rewarding partnerships.

This business forum will take place in the presence of high-profile personalities and officials, such as:

This event brings together around shared goals – further strengthening our economic ties with Southern Africa and fostering new partnerships – a strong delegation of businesswomen and men from France, representatives of the main French companies in Southern Africa, and economic players from the entire region. It also answers, for South Africa, the call made by President Cyril Ramaphosa to attract 100 billion dollars of new investments – local and foreign – in the country over the 2018-2023 period, aligned with the last « Investment Summit » on March 24, 2022, when French companies announced additional investments in South Africa worth 50 billion Rands for the coming years.

France and South Africa have been long-lasting economic partners. Thanks to the presence of most of its major groups, but also of its mid-sized companies and its start-up companies, France is also a leading investor in South Africa where 350+ of its companies employ more than 65,000 people in practically all business sectors.

The commitment of French companies aims not only at creating jobs in South Africa, but also to contribute to the country’s socio-economic transformation via partnerships with local businesses stemming from historically disadvantaged communities, and investments in training-education and the transfer of skills such as the support of local communities.

“We wish to develop this dynamism and these partnerships – and this Southern Africa Forum is one of its instruments – throughout Southern Africa, with all the stakeholders present at this Forum. Because we can do better together. French and Southern African companies are indeed destined to get closer, to form technological partnerships, to develop joint projects, and form together with their teams. I am confident that this Business Forum will actively contribute to it.” – H.E. Aurélien Lechevallier, Ambassador of France in South Africa