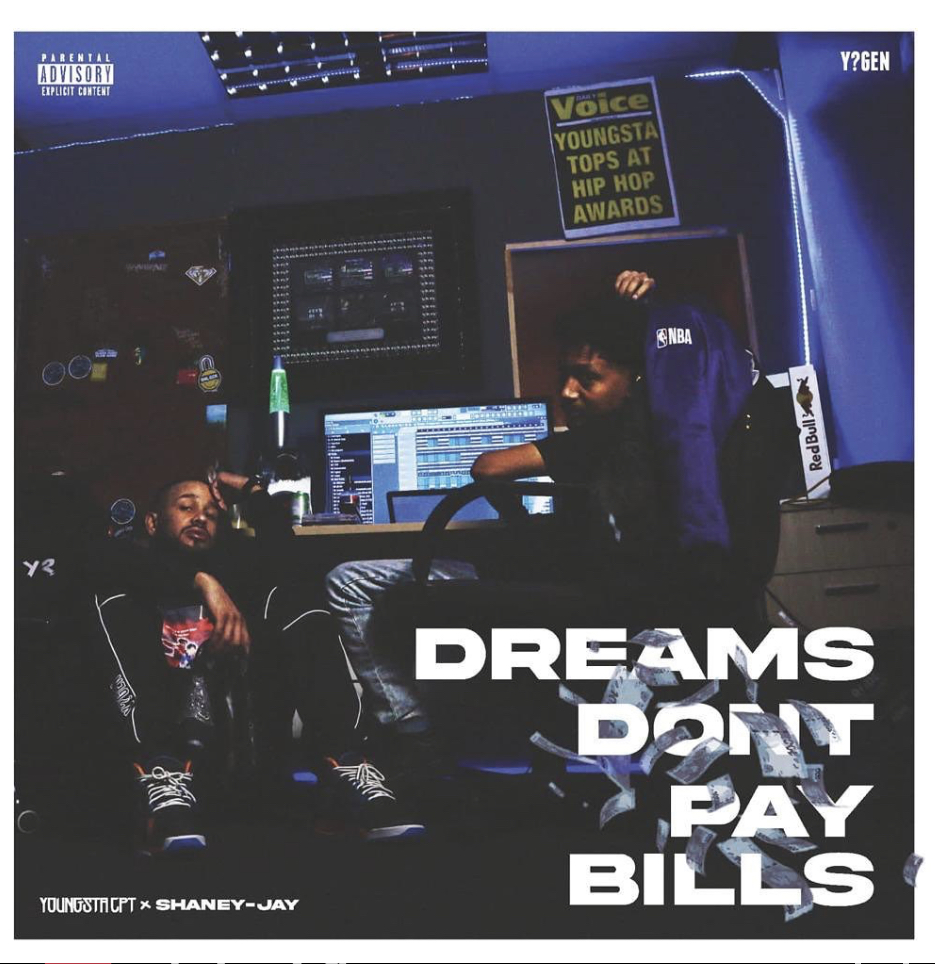 YoungstaCPT is back with his first full project since his award-winning debut album. Dreams Don’t Pay Bills (DDPB) is a 16 track collaboration album project with Cape Town-based producer Shaney Jay.

“People are gonna be dancing & bobbing to Shaney Jay’s sonically modern production from the start. If you listen deeper to the lyrics, every one of the songs relates to the album title theme… This project is designed to provide motivation to people to get up and hustle harder. After all, dreams are just dreams, until you action them and put them into practice.” YoungstaCPT

Shaney Jay describes the tape as “definitely having a more commercial sound, like most of the beats have that modern-day style but with YoungstaCPT coming through with the hard raps… people are going to relate to DDPB.”

It was a defined choice of YoungstaCPT to be able to feature artists from Cape Town (and one Australian) to collaborate on tracks for this album project.

“It was important… I have a platform that people are starting to become aware of internationally, and I want to showcase the talent in Cape Town. Getting Ready D & Emile on one song hasn’t been done since forever! That’s Black Noise & POC on the same joint! Nashiefah & QueenPinCPT are superstars in the making, they’ve got to be front running female artists in the Cape. The Big Hash, KashCPT & Tembi Powers are all leaders & voices of the new school in their own right, and Jannah Beth has the voice of an angel dove… I’d say everyone is top of their class.” YoungstaCPT

The artists agree on their favourite tracks – Coinz provided YoungstaCPT with an opportunity to relish the creative process of speed rapping, says Shaney Jay “YoungstaCPT snapped on that beat like from the bars to the flow!”; track Boychi says Shaney Jay is “a straight-up anthem with one of my favourite beats”; and of Matador Shaney says “that’s some hardcore raps… if you are a rap fan that song is for you!”. YoungstaCPT says both Boychi and Matador are “strong solo recordings… they give you different sides of me” but the track at the top of his list has to be Waarheid, because “no-one has EVER made a song called that”.

The recording process on DDPB differed from 3T says YoungstaCPT: “3T was more thought out and planned carefully, touching on a range of themes & subjects. DDPB was made during the pandemic, the looting in SA and the whole corruption scandal so there’s a different kind of hunger and survival I speak to. It’s the struggle updated..”

By working with Shaney Jay as a producer, Young says “Shaney is unlimited. He has variety and respects the process of making music. He takes inspiration from everything and is influenced by all genres of music, people who respect their craft like that should be taken seriously. Working with him, I felt lit up. I am the bulb, Shaney is the plug.”

Shaney Jay loved the experience of working with YoungstaCPT “I really still can’t believe it…it feels like just the other day I was watching YoungstaCPT from the crowd. Working in the studio with Young is really just effortless…nothing about this project felt like it was forced.”