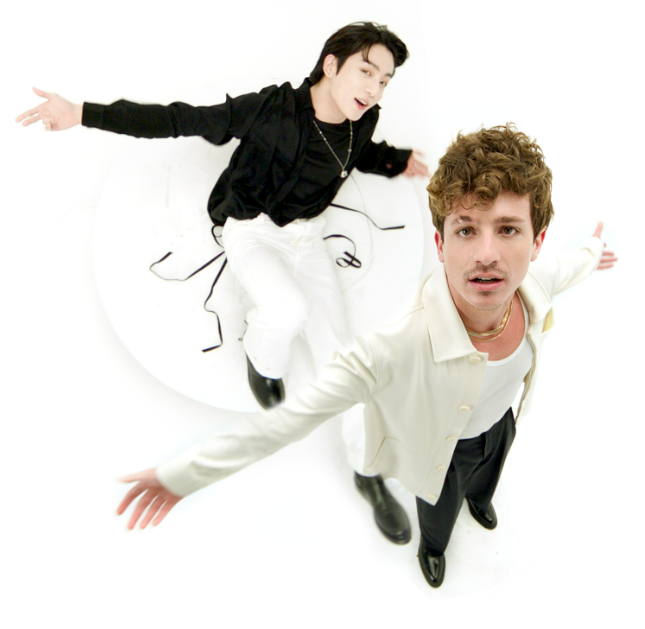 AND WATCH THE MUSIC VIDEO HERE

LOS ANGELES, CA (JUNE 24, 2022) – Today, GRAMMY-nominated and multi-platinum singer/songwriter/producer, Charlie Puth, joins forces with global superstar Jung Kook, of 21st-century pop icons BTS, for their highly anticipated new song “Left and Right (Feat. Jung Kook of BTS),” out now via Atlantic Records. Known for giving a glimpse of his creative process to his more than 16 million followers on TikTok, Puth has been teasing the track for months while fans speculated on the surprise collaboration. Click HERE to listen to the song in full.

Produced by Puth himself, “Left and Right” instantly captivates with its vibrant, funk-fueled sensibilities that effortlessly fuse the two hitmakers’ signature sounds. The highly infectious track notably ignites the duo’s creative collaboration after performing “We Don’t Talk Anymore” together at the 2018 MBC Plus X Genie Music Awards.

The song arrives alongside an official video, which was directed by Drew Kirsch. The playful visual humorously sees Puth and Jung Kook through a therapeutic fantasy to escape their own minds. Watch the video HERE.

“Left and Right” serves as the third single from Puth’s forthcoming deeply personal third studio album, CHARLIE, due later this year. After months of fan anticipation, he released his critically acclaimed first single from the album, “Light Switch,” in January 2022 which hit No. 1 on the Apple iTunes Pop Chart and has garnered more than 401 million streams globally and over 83 million views on YouTube. He recently appeared and performed the track on JIMMY KIMMEL LIVE and ELLEN, as well as the iHeart Awards, where he did a special dueling piano performance with EGOT John Legend. Puth also performed the track in addition to his other fan-favorite hits at this year’s iHeart Radio KIIS-FM Wango Tango, receiving the biggest response from the crowd of the evening. Following it up with an emotional and moving song “That’s Hilarious,” he has amassed over 99 million streams on Spotify.

At only 30 years old, Charlie Puth has proven to be one of the industry’s most consistent hitmakers and sought-after collaborators. Puth has amassed eight multi-platinum singles, four GRAMMY nominations, three Billboard Music Awards, a Critic’s Choice Award, and a Golden Globe nomination. His 2018 GRAMMY-nominated LP, Voicenotes, was RIAA Certified Gold only four days after its release and has logged over 5.6 billion streams worldwide. Puth’s 2020 collaboration with Gabby Barrett on their “I Hope” Remix earned him his fourth top 10 track on the Billboard Hot 100, hit number one on the Billboard “Adult Pop Songs” chart, and won a 2021 Billboard Music Award for “Top Collaboration.” Puth also co-wrote and produced The Kid Laroi and Justin Bieber’s record-breaking single, “Stay,” which quickly become one of the biggest songs of 2021 and holds the title for the longest-reigning No. 1 on the Billboard Global 200 chart and the first to lead it for double-digits – spending a total of eleven weeks at the top of the chart.