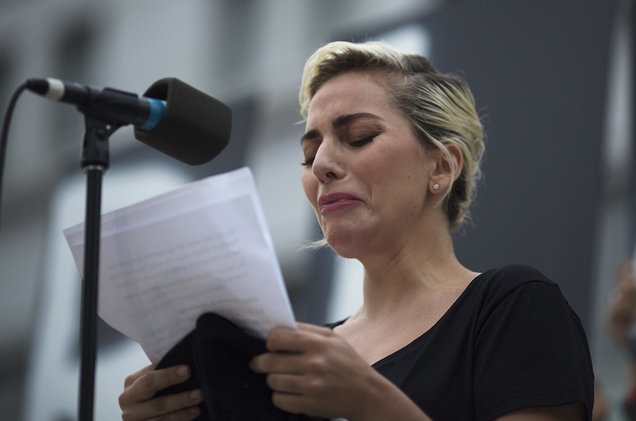 Since news broke of the horrific incident that took place at the Route 91 Harvest Country Music Festival while Jason Aldean was performing, a number of celebrities have taken to social media to not only offer their condolences to the victims of the attack, but to also speak out about instilling stricter gun control laws in America.

Jimmy Kimmel for one had something to say about it:

In addition to Eichner, Lady Gaga, Julianne Moore and Emmy Rossum were among the celebrities to post passionate, take-charge messages following the shooting. The hashtag #guncontrol has also started trending on Twitter.

It sickens me the ease in which a TERRORIST can be sold a GUN. Is the ease really worth all these lives ?! This needs to stop.

Prayers are important but @SpeakerRyan @realDonaldTrump blood is on the hands of those who have power to legislate. #GunControl act quickly. https://t.co/bXZQ7enuEp

I mourn this senseless loss of life. What will it take, #Congress, for you to act? @Everytown @MomsDemand #endgunviolence https://t.co/6HpuWk9ZLe

Our grief isn't enough. We can and must put politics aside, stand up to the NRA, and work together to try to stop this from happening again.

I believe in prayer, but it's not enough by itself. We need better LAWS. In no world does a CIVILIAN need a MACHINE GUN. Let's fix this.

How long do we let gun violence tear families apart? Enough. Congress & the WH should act now to save lives. There's no excuse for inaction.

I'm so devastated by this senseless attack #guncontrol is needed NOW! Too many innocent lives have been taken,it's time to change something

Will our lawmakers listen this time? https://t.co/cgb7NFCqaq

sick to my stomach. we have a show tonight & i don't know what we're supposed to tell people. other than WE NEED GUN CONTROL.