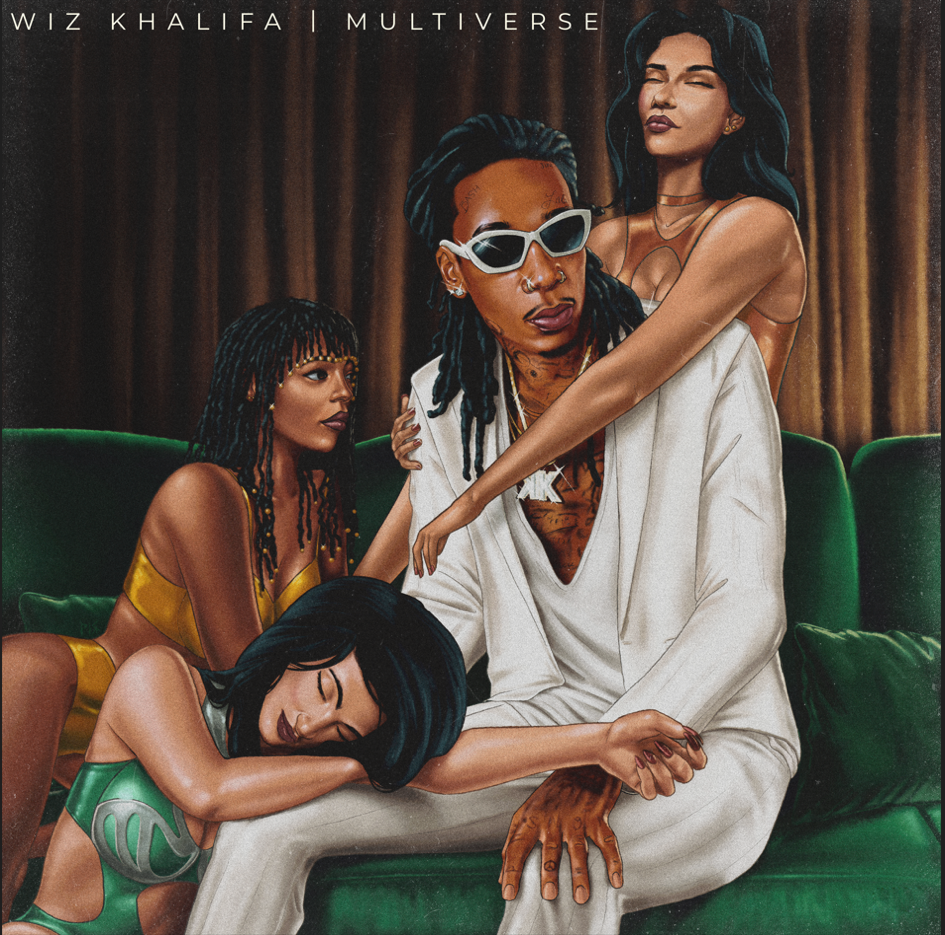 The highly anticipated album is Wiz’s seventh studio album and first full length album since the release of Rolling Papers 2  in 2018. On the album, Wiz reunited with Hitmaka to produce five songs. The pair have a long history of successful collaborations, including 2017’s “Something New” and “Still Wiz” released in 2020.

Multiverse comes at an exciting time for Wiz Khalifa as he also just kicked off his co-headlining tour, The Vinyl-Verse Tour, with Logic this week. The tour opened on Wednesday night in Irvine, CA followed by a show at Los Angeles’ YouTube Theate. Tickets for the rest of the tour are available here & watch “An Offer They Can’t Refuse”, a preview of the tour – here!

Multi-platinum selling, Grammy and Golden Globe nominated recording artist Wiz Khalifa burst onto the scene with mainstream success with the release of his first major label debut album, ROLLING PAPERS‎ in 2011. ‎ROLLING PAPERS spawned the hugely successful hits “Black and Yellow,” “Roll Up,” and “No Sleep” and gave Wiz the platform to win the award for “Best New Artist” at the 2011 BET Awards and “Top New Artist” at the 2012 Billboard Music Awards. As a follow up to ROLLING PAPERS, Wiz Released O.N.I.F.C. in 2012. This album featured tracks “Work Hard, Play Hard” and “Remember You” featuring The Weeknd. His third studio album released in 2014, BLACC HOLLYWOOD, ‎debuted at #1 on Billboard’s Top 200 album chart and included hit single “We DemBoyz.” Soon after, Wiz’s track,‎ “See You Again,” off the FURIOUS 7 soundtrack, catapulted to the top of the charts across 95 countries. Wiz released his album, KHALIFA, in February 2016 as a thank you to fans which included the tracks “Bake Sale” featuring Travis Scott and “Elevated.” In June of the same year, Wiz collaborated with Juicy J and TM88 to debut TGOD MAFIA PRESENTS: RUDE AWAKENING and embarked on his co-headlining “The High Road Summer Tour” with Snoop Dogg. On April 20th, 2017, Wiz launched his mobile app, Wiz Khalifa’s Weed Farm, which has garnered over 10.1 million downloads and is currently being played in over eight countries and six languages.  In February 2018, Wiz partnered with Sovereign Brands to create McQueen and the Violet Fog, an Award winning gin and rated by the NY Times as the “Best Gin”. In April of 2019, Wiz released his 5-part docu series with Apple Music, “Wiz Khalifa: Behind the Cam,” which gives viewers an exclusive look into his life and career. ITl Wiz is also a series regular in Fox’s animated sitcom, “Duncanville ” which had its season 3 premiere on May 1, 2022. On 4/20 of 2020, Wiz released his latest project, The Saga of Wiz Khalifa, which features his tracks, “Contact”, featuring Tyga and his latest single, “Still Wiz”. In 2021, Wiz released his latest playlist, Taylor Nights. Most recently Wiz released his collaborative album, Full Court Press, with Girl Talk, Big K.R.I.T., and Smoke DZA as well as his solo single, “Iced Out Necklace.”