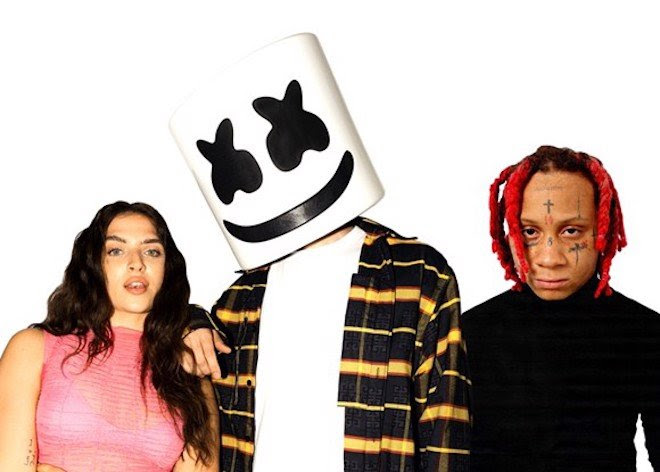 GRAMMY®-nominated chart-topping artist Marshmello teams up with acclaimed British singer-songwriter Mae Muller on the captivating new single “American Psycho” (feat. Trippie Redd), which was released today by Astralwerks. With characteristic honesty, Muller admits to her own flaws as she addresses an ex, concluding “You put the T in toxic.” Trippie Redd tells the other side of the story on his verse. The song opens as an introspective piano ballad and Marshmello’s production builds from there, swelling to an infectious chorus.

Director Raja Virdi (Holly Humberstone, George Ezra, Passenger) brings a stylized 90s vibe to the official video for “American Psycho,” which explores the dualities found in individuals and their relationships. As she performs, Mae Muller moves through vastly different dreamlike landscapes, from blossoming, pristine environments infused with joy to grungy, decaying red worlds. Trippie Redd delivers his verse amid dark red clouds and lightning flashes – and there are signs of Marshmello throughout. View the video, which made its broadcast premier on MTV Live, mtvU and the Paramount+ Times Square billboards earlier today.

GRAMMY®-nominated Marshmello’s star continues to rise as the famously masked artist breaks boundaries across the industry. With chart-topping singles and collaborations with the likes of Juice WRLD, Halsey, Demi Lovato, Bastille, Kane Brown, Selena Gomez, Khalid, Jonas Brothers, and more, Marshmello has clocked almost a staggering 13 billion streams across Spotify alone. With almost 40 million monthly listeners on the platform, he’s one of the top 40 most streamed artists in the world on Spotify and the third-most-subscribed artist on YouTube. Featured on the cover of the Forbes magazine “30 Under 30” issue, Marshmello has proved to not only be an innovative producer, but a forward-thinking businessman. With his own brand of chocolate-filled marshmallows (“Stuffed Puffs”), he’s also launched a children’s entertainment channel, Mellodees. Marshmello collaborated with the Jonas Brothers on their early summer smash “Leave Before You Love Me,” which peaked at No. 13 on the Billboard Hot 100 and was also nominated for the best dance / electronic album at the 2022 GRAMMYs. Most recently, Marshmello teamed up with Khalid to release “Numb,” which was accompanied by a music video that surpassed 1.4 million views within 3 days of its release.

British singer-songwriter Mae Muller is intent on telling it precisely like it is — she’s frank, funny, and endlessly relatable. On her Capitol Records debut EP no one else, not even you, she offers a rarely-glimpsed look at the tension between the thrill of new love and the fear of losing your sense of self. Mae showcases the fearlessly honest yet irresistibly fun songwriting that’s seen her hailed as “a clear pop sensation in the making” by Wonderland and the “new queen” by NYLON and earned praise from The Fader, GQ, Paper, The Los Angeles Times, Ladygunn and more.  Mae’s breakout Platinum hit “Better Days” with NEIKED x Polo G is a Top 10 radio airplay smash also charting in the Top 10 across Spotify and Apple.  “Better Days” ranks as a Top 5 trending sound on both TikTok and Snap and is fast approaching one billion streams worldwide.  Mae was named a YouTube Trending Artist on the Rise and Billboard “Chartbreaker” while her television performances include ”The Voice,” “Dick Clark’s New Year’s Rockin’ Eve with Ryan Seacrest” and “The Tonight Show Starring Jimmy Fallon.” Mae has also stormed her way through the live world, earning an adoring worldwide following who’ve come to rely on her uncompromising self-expression.  Mae has performed at festival stages across the U.K. to huge crowds including the likes of Reading & Leeds, Bestival, Latitude, and Sundown Festival.

One of the most versatile and creatively daring artists in hip-hop today, Trippie Redd makes music that’s both wildly experimental and massively appealing. Since delivering his debut mixtape A Love Letter to You in 2017, the multi-Platinum-selling, chart-topping rapper, singer/songwriter has continually defied genre boundaries, embedding his melodic take on rap with frenetic elements of rock-and-roll and heavy metal. And with his penetrating lyrics and nuanced but hard-hitting vocal performance, the 23-year-old Ohio native matches that endless ingenuity with a powerfully raw emotional impact.

Racking up over 18 billion streams to date and having five consecutive projects land in the Top 5 of the Billboard 200 chart, Trippie Redd has evolved from budding SoundCloud rapper to a global powerhouse. Not only has he collaborated with some of today’s biggest names in music spanning Drake, Future, XXXTENTACION and Juice WRLD to Illenium and Marshmello to Travis Barker and Oliver Tree, but he also made his acting debut during an episode of Lil Dicky’s critically acclaimed DAVE followed by an appearance on Machine Gun Kelly’s Good Mourning. His latest album, Trip At Knight, brought a No. 1 debut on Billboard’s Top R&B/Hip-Hop Albums and went on to amass over 2.5 billion streams, led by single “Miss The Rage” featuring Playboi Carti. Now, looking towards the future, Trippie Redd shows no signs of slowing down, working on his biggest and boldest records yet with plans of releasing music very soon.

Established in 1993 in New York City, Astralwerks was the brainchild of Caroline Records staffers who saw an opportunity for a label focused on the nascent electronic and ambient scene. Now based at the historic Capitol Records Tower in Hollywood, Astralwerks has emerged as a modern, artist-first label and the #1 market share leader for dance/electronic music in the U.S. Combining a scalable, independent and global-thinking ethos with the ability to tap into the resources of a major label has enabled Astralwerks to sign such artists as ILLENIUM, Jonas Blue, Alison Wonderland, EDEN, ZHU and Alesso. As a testament to its pioneering approach, Astralwerks has amassed 30 GRAMMY® nominations, taken home six GRAMMY Awards and had historic releases from the likes of The Chemical Brothers, Swedish House Mafia, Halsey, Porter Robinson, Phoenix, Eric Prydz, Fatboy Slim and many others. The label has also released such massive singles as the 6x Platinum “Happier” by Marshmello + Bastille and FISHER’s “Losing It.”