COCO JONES RELEASES DELUXE VERSION OF DEBUT EP, WHAT I DIDN’T TELL YOU 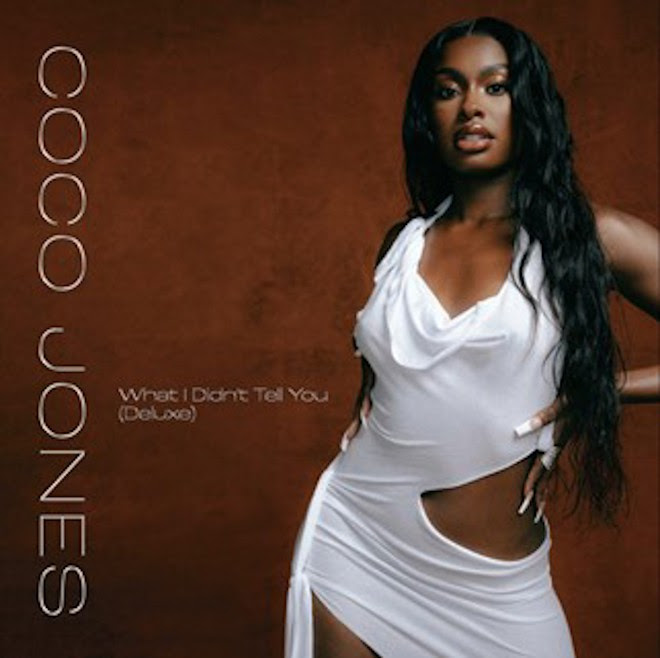 NOMINATED FOR OUTSTANDING NEW ARTIST AT THE 2023 NAACP IMAGE AWARDS

Coco Jones, the rising young R&B songstress and Peacock Bel-Air star whose critically acclaimed debut EP WHAT I DIDN’T TELL YOU was introduced in November reveals the expanded DELUXE EP containing four additional new tracks and live performance visual of “Double Back,” via High Standardz / Def Jam Recordings. Coco introduced her debut EP with a show-stopping BET Soul Train Awards ’22 live performance of the single “ICU”, which The Hollywood Reporter named one of the Top 10 Best Songs of 2022.

The four new tracks on the deluxe include “Simple,” Coco’s duet collaboration with Babyface from his critically acclaimed Girls’ Night Out album. Three more new tracks, “Fallin’,” “Put You On”and “Plan B” join the EP’s original seven songs – including “ICU” and “Caliber” – that have now been entirely re-sequenced as well for the release.  (See new track list below.)

“Caliber,” which has maintained impressive global play for nearly ten months, has garnered over ten million streams across all platforms and helped launched Coco toward nominations as ‘Best New Artist’ at the BET Soul Train Awards and “Outstanding New Artist’ at the NAACP Image Awards.

In June, Coco debuted a live performance for “Love Is War,” a composition brimming with vulnerability and intensity as she sings about the challenges of a fractured relation­ship: “I know you’ve got scars/ I’ve got ‘em too.”  The Amazon Original song, issued as part of “Credit the Culture,” Amazon Music’s celebration of Black Music Month, was first heard on Amazon Music’s R&B Rotation playlist.

WHAT I DIDN’T TELL YOU (DELUXE):

Raised in Nashville, 25-year old Coco Jones is perhaps best-known to over 2 million TikTok followerstoday as the new ‘Hilary Banks,’ cousin of ‘Will Smith’ in Bel-Air, the Peacock Fresh Prince reboot that premiered in February 2022.  Coco was encouraged to pursue her passion by her mother, a singer, and her father, who played in the NFL. By age nine, Coco was record­ing demos that her mother would burn on CDs to introduce the youngster at auditions.  Music provided her entryway into acting, first as a recur­ring guest on So Random! the Disney musical sketch comedy series (2011); then as the golden-voiced love interest in the Disney TV movie, Let It Shine (2012).  She has stayed busy ever since, flexing her range across titles that span adventure romps, intense dramas, holiday fare, and comedy horror (Netflix’s Vampires vs. the Bronx).