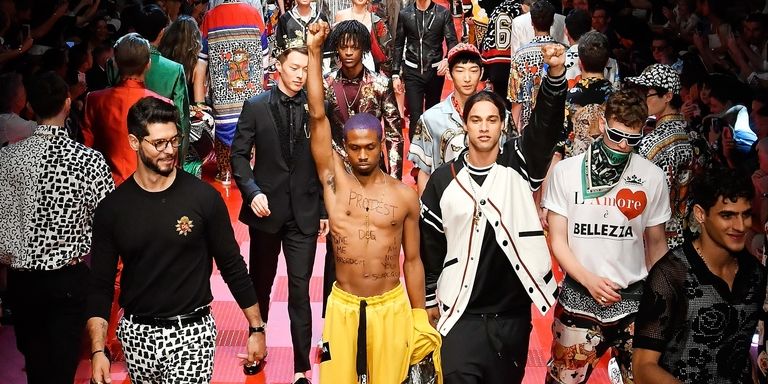 Did you know that Dolce & Gabbana, the international fashion brand, takes pride for the fact that it dresses FLOTUS Melania Trump? No? You’re not alone. There are people across thew world who are unaware of this fact, and that there are thousands who have come out to protest against D&G’s pride.

Taking place in Milan last Saturday June 17th , the D&G catwalk show saw 21-year-old model and musician Raury, removed his hoodie and bomber jacket during the finale to reveal the phrases “PROTEST”, “D&G GIVE ME FREEDOM” and “I AM NOT YOUR SCAPEGOAT” written across his chest. 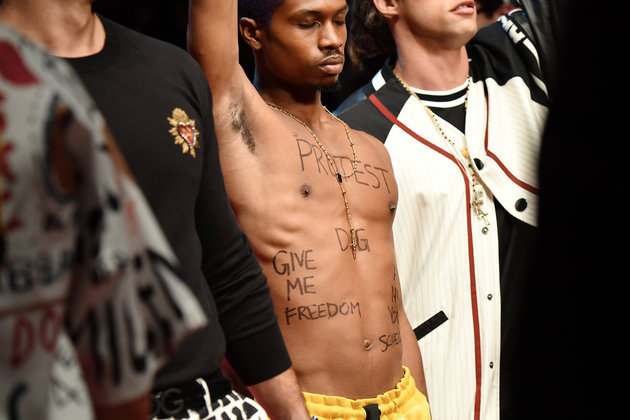 MILAN, ITALY – JUNE 17: A protester is seen on the runway at the Dolce & Gabbana show during Milan Men’s Fashion Week Spring/Summer 2018 on June 17, 2017 in Milan, Italy. (Photo by Jacopo Raule/Getty Images)

Italian designers Domenico Dolce and Stefano Gabbana had cast the Atlanta-based model, who had previously never walked for a fashion house before, as part of an on-going theme of millennial-filled runways.

However, when he agreed to appear in the show Raury was unaware of the designers affiliation with the First Lady of the USA, Melania Trump, who they have dressed her several times and voiced their steadfast support for her.

“Boycotting is the people’s voice”

But what’s even more powerful is the fact that, despite knowing that he might never dabble in the fashion world ever again afterwards, Raury did the courageous thing and made his stand.

In his words “We’re not scapegoats. You are not about to wash your hands with us.”