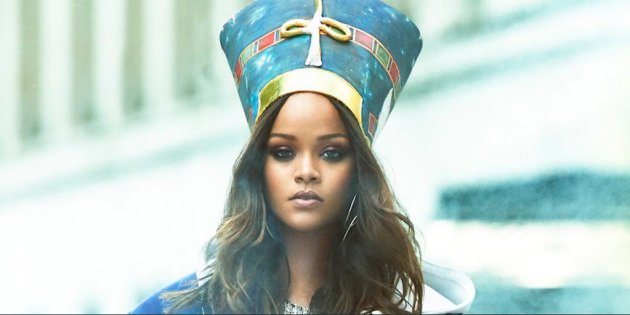 Rihanna is on the cover of Vogue Arabia and both she and the magazine have been getting some backlash.

Aside from making some people very unhappy, Rihanna sure looks stunning on the cover of the fashion bible’s issue for the Middle East. Her beauty is unmatched right now and she is killing the fashion and makeup industry with her Fenty brand. But is this just another big name celebrity crossing the cultural appropriation line. “Celebrating Queen Nefertiti, @badgalriri is our November queen of style,” Vogue wrote on Twitter.

“Can someone explain why rihanna was on the cover for vogue arabia,” one fan tweeted. On her cover photo, the magazine dressed Rihanna to pay homage to one of Egypt’s most celebrated historic figures, Queen Nefertiti. Rihanna is clearly a fan of Nefertiti since she has a giant tattoo of her on her torso and while some readers of the magazine are clearly angry, the vast majority of RiRi’s fans are excited to see her paying homage to one of the most famous female icons this world has ever seen.

This is not the first time that Vogue is getting a backlash for featuring a celebrity on the cover of one of its niche issue. Earlier this year, Vogue India featured Kendall Jenner on the cover for its 10-year anniversary issue and that cause a big uproar. “India has given the world so many beautiful faces to admire,” the magazine said in a statement. “After all, we are Vogue, an international brand, and we want to give the love back by featuring some of the best international celebrities on our covers. Occasionally!”

See what some folks are saying on Twitter below:

Ignoring the MANY cultural issues here, she looks nothing like the powerful #Nefertiti and these photos aren't helping👎#VogueArabiaXRihanna pic.twitter.com/dBztEm8lkJ

Kendall Jenner got featured on Vogue India = Apocalyptic melt down.