It was a moment for people to finally come together.

Beyonce, George Clooney, Justin Bieber, Stephen Colbert, and Reese Witherspoon are amongst the stars to have participated in a live telethon to raise money for relief following the destruction caused by hurricanes Harvey and Irma.

The telethon was originally formed to raise funds for victims of Hurricane Harvey in Houston, Texas, but has since expanded to include relief for Irma, which hit parts of Florida after devastating the Caribbean islands last week.

Singer Stevie Wonder kicked off Tuesday’s star studded Hand In Hand telethon to raise money for hurricane recovery by getting political. Wonder started the show by saying, “Anyone who believes that there’s no such thing as global warming must be blind or unintelligent.”

The Hand In Hand telethon was run on every broadcast network to benefit victims of hurricanes Harvey, which devastated the Houston area, and Irma, which slammed Florida over the weekend. The event mirrors past telethons for natural disasters.

In addition to musical performances, celebrities took phone calls during Tuesday’s telethon from people making pledges to help those in need. 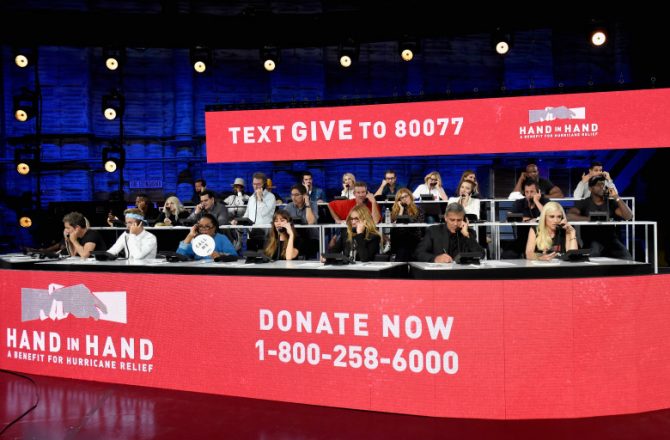 Watch the telethon recap above and donations to the fundraiser are tax-deductible and can be made by clicking here.